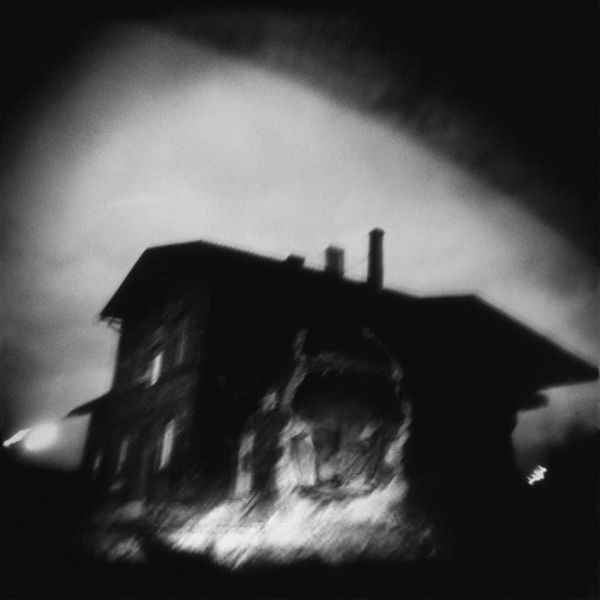 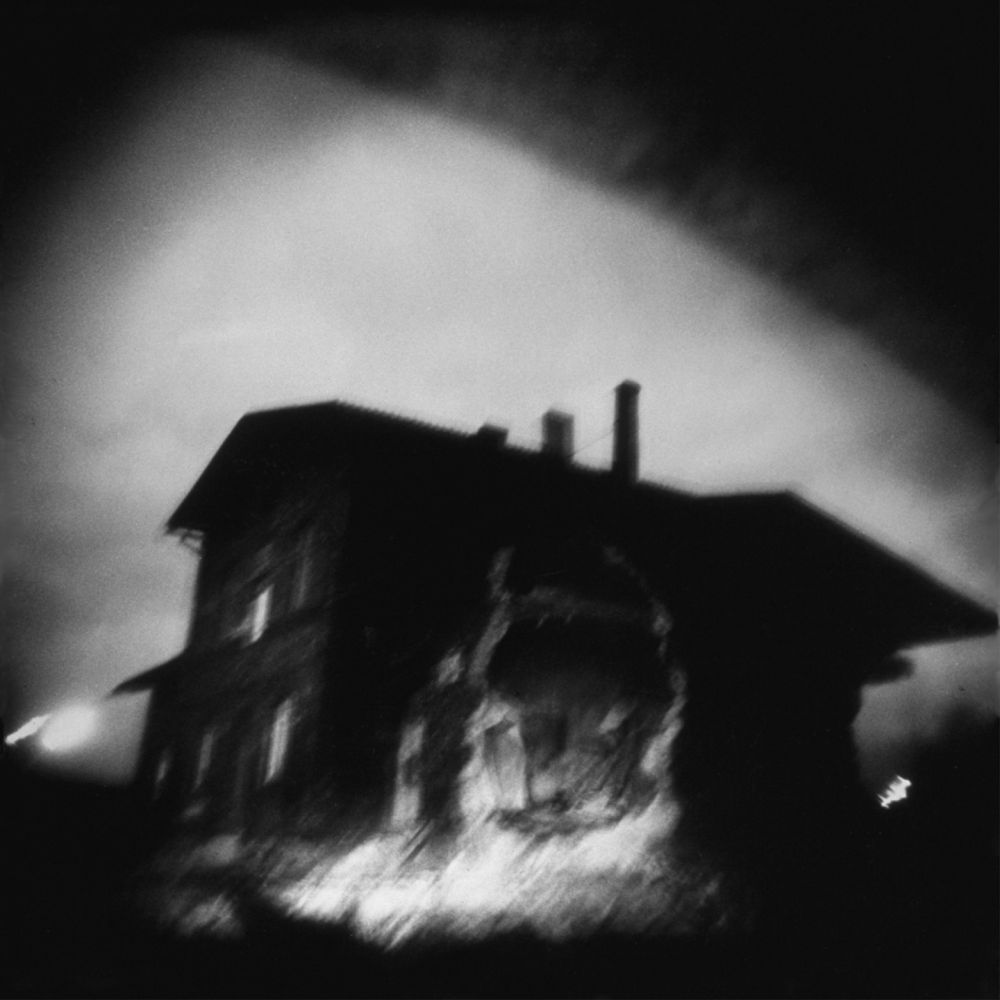 On the part of both label and artist, it was little short of a total struggle to get this album out - creative, social, ideological. The 130701 label has been set up expressly for the purpose.

set fire to flames are a collective of thirteen musicians engaged in the independent, hyper-creative musical community of Montreal (including members of Exhaust, Fly Pan Am, godspeed you black emperor!, Hanged Up, HRSTA, squintfucker press, undo.... ). Brooding and beautiful, haunted and haunting, 'sings reign rebuilder' is so stunningly / lovingly played and skilfully assembled, infused throughout with a massive sense of slow-burning tension and periods of weighty, rousing release - sweeping everything along with it.

In these times of widespread sonic formalism and retrofit pick n' mix, here is an album that resonates intensely with political expression and collective questioning, where the personal is deeply, inextricably political. Voices from the edge bear testament to the disguised agendas that govern our lives, to the brutality and restrictions rained down on any attempt to live freely.

Shot through with a palpable sense of love, loss, and (semi-thwarted) adventure, with tension, discomfort, world-weariness, the album grips the heart and drags the listener to spaces beyond language, beyond which mere words are rendered clumsy, and cumbersome, utterly inadequate. Exploring the boundaries of freedom, the project emerged from the initial desire of the artists to fully immerse and engage themselves in the process of group improvisation without getting so heavily caught up in what the end results would sound like. Forged in a communal atmosphere of creative activity, the group explain the recording process as deriving from an intensely focussed period of action:
'none of us thought that the final results would end up on a record, [we wanted] to conduct the whole five day recording session like a series of experiments---to get lost in the sound as it was actually happening---to make the whole recording an exploded intense event---to push tolerance levels and limitations with a group of people sonically...'
'...the initial idea was to gather a group of folks together in my house in montreal and record as much as we could over a five day period---to become shut-ins---to operate on no sleep/confinement/intoxication---some of us were interested in seeing what would actually happen if we attempted to record improvised drones and textures under those conditions---and what impact that might have on yr. head---how individual/collective tension would play out---and what the end result would sound like---so a lot of experimentation with tolerance, repetition and duration---drones...'

'to make all of this possible, we ended up recording on a pair of da-88's instead of analog tape---i was really sceptical at the start having never used these machines before but from an economical stand point, it was the only way we could pull off what we wanted to do---and i was surprised at how good the machines actually sounded---the da-88s have 2 hours of potential recording time on one tape and are a lot cheaper than analog---so we could just hit record and let the tape roll for 2 hours without having to worry about the cost---this freed us up considerably in that we didn't end up censoring ourselves at all---there was no fear of expensive amounts of analog tape rolling off into infinity and no pressure in having to fit everything onto a 30 minute roll......

'we recorded it all in my house in montreal during a five day stretch in july of 2000---this house is an old falling down monstrosity that feels more like a shack in the woods than it does a city apartment---some of us have bets out on how it will all end---will the house collapse inward or topple over to the left---more likely the real-estate speculators/urban planners (who should all be put on trial for what's being done to our cities)---more likely their bulldozers will get to it first---this place has a long and crazy history to it--- some say the building has been standing since 1878 but the official records were lost when the archives building burnt down at the turn of the century so no one knows for sure---it used to be a 10 cent shoe shine parlour---it was also a brothel in the forties---everyone has ghost stories about old houses... but over the eight year span that i have lived here, things have happened that i can't explain---and so some folks think an ex-brothel worker lives here as well---at the very least this house has an undeniable heaviness to it.... a tragic/fucked/beautiful/sinking weight that you feel instantly and that couldn't be erased from the tape---and so as well as sounding great acoustically, this house also shaped the way the recordings turned out in ways that can't be mapped---for me, the recordings were as much about this house as they were about the sounds made inside it --- and i felt really strongly about documenting this place somehow before its inevitable fall to the condominium complex......

'and so these set fire to flames recordings happened---a list of people that i thought would play well together was drawn up---we set up all of the gear on the first floor (kitchen/living room) and the control/mixing room was in a bedroom on the second floor (up an old rickety set of stairs)---you can hear the house all over the recording (the rickety wooden staircase / creaking floorboards / creaking chairs / traffic and police cars outside / men coming out of the mosque down below / my landlord working with a power saw in the back yard)---all of these sounds became an important part of the final recording---five days of continuous recording netted us roughly twelve hours of raw sound which i ended up mixing for the next two weeks---everyone had agreed early on that i would eventually throw all of this raw sound into a computer and hack away at it until something made sense---i spent the winter of 2001 out in a friend's unused shack in mill bay (vancouver island)---i took three hours of those initial recordings with me, dumped them into a computer and started cutting up the sound---all of it was hacked apart and then reassembled into a 73 minute monstrosity---as well as the stuff that was recorded in the montreal house, i also used some audio- fishing stuff from coney island and east hastings in vancouver and some stuff on vancouver island (audio fishing = a compulsive need to record shit = walking around with a microphone and seeing what you catch = a need to record decaying/dying/beautiful sound...to document or archive stories/oral histories like old folkways records or radio documentaries.....)---and so this final document of that five day period (which was magic and the fucking house was levitating.....) now makes up 'sings reign rebuilder'......... the record is about 60% improvised and 40% composed and the five day recordings turned into something more than originally intended---it wasn't just thirteen people droning aimlessly for ten hours---a lot of composed pieces were loosely worked out---and even the improvised stuff sounds totally composed---during that five day stretch i witnessed a lot of folks playing together with unbelievable amounts of subtlety/fragility/beauty---things just worked out somehow and we got lucky.......'

Far more than simply lucky, the results are stunning. set fire to flames effortlessly slip and slide from extended passages of scratched-out, freeform improv / concrete clatterings to (deeply atmospheric) location recordings and stirring, angular string arrangements; to deep / sparse drones, and dense, heavily rhythmic workouts. Tracks move through modes of simmering, slow-building tension, witness sudden surges and flowerings, rapid decelerations. Sparks fly. Alliances are formed. The group spontaneously implodes / explodes. The material is continually shuttling between a state of almost treacherous, unanchored awe (the combination of both dread and reverence) and a calmer or increased sense of purpose / assurance - as though suddenly glimpsing a point of light through the uncertainty and soaring towards it with renewed, galvanised collective purpose.

Beautifully packaged in gatefold vinyl / CD, and including a lavish, 24-page colour booklet including texts / prints and photographs, 'Sings Reign Rebuilder' is a stunning, beautiful record that will grip heads and hearts, that hooks you in and keeps you listening close.